To subscribe to our newsfeeds, please visit our "Investors" tab.

NASA Teams up with Spincraft

Engineers at NASA are looking to give a new "spin" on the making of aerospace components in the hopes of making them lighter, stronger and less expensive.

John Wagner and Marcia Domack, both of the Advanced Materials and Processing Branch at NASA Langley Research Center in Hampton, Va., have spent the past few years getting funding to work with Boston-based metal fabricator Spincraft to utilize an innovative manufacturing technique called spin forming to create a model of the forward pressure vessel bulkhead (FPVBH) of an Orion-type crew module. They have also partnered with researchers at the Lockheed Martin Michoud Assembly Facility (MAF) for preparation of the material and definition of the FPVBH design.

The innovative manufacturing technique is a forming process in which a disc of metal is revolved at controlled speeds on a machine similar to a lathe. Domack also described it similar to a record on a turntable, with the needle pushing down.

What makes it unique is that the spin forming process can create the complex crew module shape out of one piece of metal. A normal build would require several pieces of material being welded together into a capsule shape.

"The spin forming process results in fewer welds, which reduces the chances of defects, which makes the capsule safer for the astronauts," Wagner said.

This manufacturing process is also considered "greener" in that it produces less waste.

Wagner said that when building the 60,000-pound (27,216 kg) external tank for the shuttle, fabricators started with 600,000 pounds (272,155 kg) of material. Roughly 90 percent of the material is machined away. The current Orion fabrication plan also requires lots of machining.

The spin forming process is considered near "net shape" which means the initial production of an item is very close to the final shape. Wagner thinks this manufacturing technique could appeal to NASA and commercial aerospace entities as they look for better ways to build spacecraft.

During a time when companies, including NASA, are looking at other lightweight materials such as composites to make crew capsules and other pieces of flight hardware, sometimes metal gets looked at as "old school."

But Wagner and Domack don't see it that way.

"We feel that with this new innovation in technology the time was right to attempt to spin form a single-piece crew module," said Domack.

The current Orion FPVBH model was made with a standard aluminum alloy. Wagner and Domack will study it to make sure the spin forming process gave them the results they are looking for.

If the results are what they expect, they will next have Spincraft make a model using aluminum lithium, a more advanced, lighter weight material.

"This was just too good of an idea to let go," said Wagner. 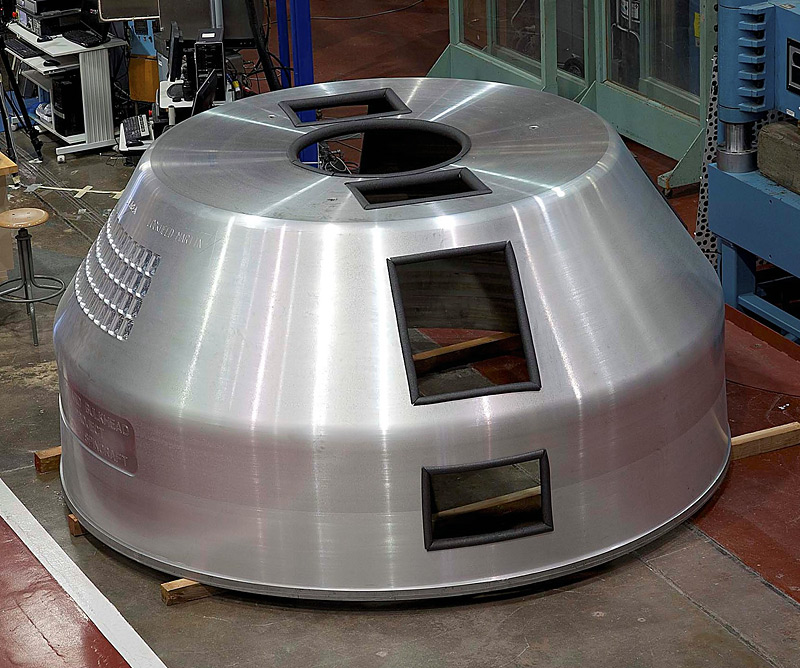 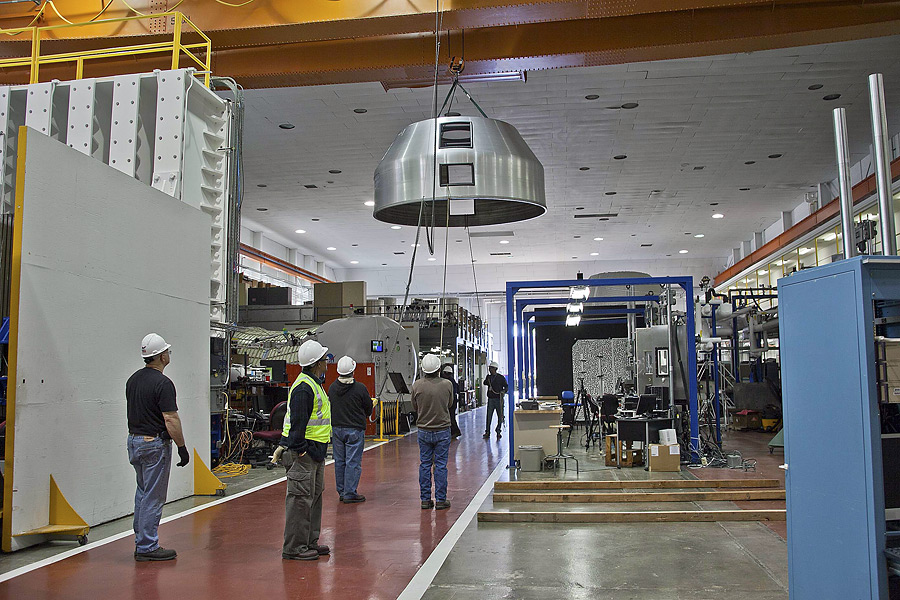 Getting the spin formed model into the lab at NASA's Langley Research Center. Credit: NASA/Jim Baughman